Last week was the amazing Do It With Drupal conference and Angela Byron wanted some updated contributor statistics for her presentation. So, I analyzed the commit messages for Drupal core to find who has been helping out and once again the process and the data are getting better and better.

This time I'm using direct database information from the cvs commit log tables and using PHP to parse it which means that it's easier to create rules for fixing usernames or eliminating bad data. I also pulled in company information from groups.drupal.org to get a rough sense of which companies, as a group, are contributing the most to Drupal core. AND, thanks to Dreditor the commit messages are getting cleaner and include information about the person who has done reviews on patches.

Remember, none of this data is really perfectly accurate, but it gives us a tangible sense of what is going on.

Attached are a CSV file and an OpenOffice.org spreadsheet with the data. They show the uid of the user from groups.drupal.org, their name, their organization (if they specified one), the number of times they were mentioned as an author of a patch, the number of times they were mentioned as a reviewer of a patch, and the commit ID where they were mentioned. The commit ID is useful when chasing down bad data so that I can improve the parser. So, if you find a problem please let me know the CID value so I can improve the parser. There's a chance that this could eventually make it onto drupal.org itself, but I'd like to improve the process first to understand whether or not that makes sense.

Enough with the process - it's time to name names!

If you prefer visual format, here's a tag cloud version created by Webchick. 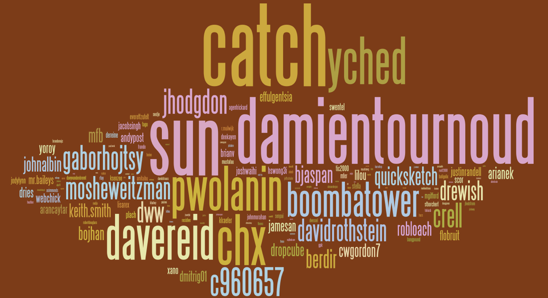 There were just under 700 people mentioned in patches and right about 500 people who were mentioned on 3 or fewer patches with a total of 696 patches. Extreme contributors (those responsible for more than 20 patches) contributed 3,246 patches. This feels like a slightly shorter tail than with Drupal 6. I think when Drupal 7 comes out I'll have to do some more detailed analysis on the length and strength of the Drupal contributor distribution.

As always, the data is attached - please provide more analysis!