You could also call this "Free Nexus5 if you switch from AT&T or Verizon." Here's a comparison of the plans and how I arrived at the idea of "Free" Nexus 5.

This chart shows how much money both of these plans cost. I used a MotoX as the subsidized phone since it is similar in specs to the Nexus 5. 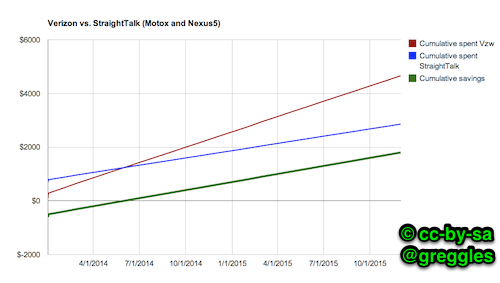 For our 2-phone-household, we had been spending $4,658 in a 2 year cycle compared to our annual of $2858. Both of those numbers feel pretty high, but at least with StraightTalk we're saving $1,800 in a 2 year cycle. Source data for that chart is in this spreadsheet

Let me say that again: $1,800 savings in a 2 year cycle! We could actually buy a new Nexus phone (or similar) every year and still save money compared to Verizon.

Enter the Nexus 5 and StraightTalk

The Nexus5 seems like a great phone. Totally unlocked, so I can switch plans (or countries) whenever I want. That's something I couldn't do (at least not without paying a lot) with Verizon. It's a top of the line phone in every way I can see. Some people don't like the plastic on the back of it. I find the plastic to be a great material. It's lightweight and seems plenty strong to me. The phone is very fast, the screen is great, and did I mention it's not on a contract?

StraightTalk is an "MVNO" for T-Mobile and AT&T's networks. When you get a "straighttalk" plan you are basically buying access to either the T-Mobile or AT&T network but getting the website and customer service of StraightTalk. Their website has a few bugs and is hard to use, but...it gets the basics done. If the plan is cheap enough then I can put up with a website that's a bit rough around the edges. After all, I've had bad customer service from AT&T and Verizon and was paying them a lot more!

A Nexus 5 phone takes a micro sim card. Straight Talk offers sims for either AT&T or T-Mobile. For my home and travel patterns, AT&T has a much better network. There are some places where T-Mobile is better. I like T-Mobile's company spirit, but their network is just not good enough. WalMart sells the Straight Talk AT&T Compatible Micro SIM with $45 monthly service card The sim alone is $6.88 or bundle it with a month's service and save. They don't seem to sell it IN their stores, unfortunately, so you have to pay for and wait for shipping. Amazon has it, but for a lot more money! You can also get it from StraightTalk.com itself, but the shopping experience is pretty abysmal. I really suggest Walmart.

Once it arrives in the mail, activate your SIM. You can even "transfer" or "port" in your existing number so that you don't have to tell everyone a new number. If you want to transfer your number be sure to do it while activating your SIM. They may not be able to port your number if you have already activated your SIM (in which case they'll ship you a new sim in ~5 days, but there may be a small fee for that).

Configuring a Nexus 5 for StraightTalk

After activating you use the little tool in the Nexus 5 to pop out the sim carrier and install the sim. Simple enough. You then have to create a new APN setting and delete the default APN setting. I'm a pretty techy person and that sentence makes me cringe. Here's what to do:

You will see a lot of fields and can enter data by clicking on the field name. You need to enter the following information:

You will see a lot of other fields. Do not change their values.

Here's a video of how to do this:

The full history of our phones and providers