We went up to Fort Collins this weekend and had a great time. Here are some tips to make your trip up there even better:

1. get tickets to New Belgium early

As it was, we took the "self-guided" tour of New Belgium, which was great, but not as good as a full tour.

I've been in Argentina for almost two months and finally found some decent beers. Quilmes and Brahma and friends are, frankly, not going to cut it for me.

The first place that was recommended to me was Buller Brewing Company (ratebeer review) which turned out to be pretty good. They have a selection of about 8 beers which were all decent, though none were really amazing. The dry stout was probably the best variety that they had. I went to the location near Recoleta cemetery which of course is a nice tourist area on its own.

In a non touristy location is Cossab - at Carlos Calvo 4199 - which is just a standard corner bar which happens to serve hundreds of local and international beers. The international selection is dominated by Dutch/Belgian varieties and a few standards (Guinnes - duh). In addition to great beers, Cossab also has quite good food including a Wednesday Night "Pizza Libre" night where "Libre" means all you can eat instead of just "free". For 10 Pesos, it's a good deal.

For christmas I got an awesome present: Extreme Brewing by Dogfish Head Owner

. I'm not sure I could really ask for anything more!

I went to the North Star Restaurant and Brewery last night and had a pretty good time. They just opened up a few months ago after having a bit of a hard time getting their licenses agreed to by the neighborhood. Congratulations to them on persevering and turning a basically dead corner property into an anchor for a small commercial strip. This area of Denver is really growing and it's great to see.

After a weekend of gardening, rock climbing, and house chores nothing makes for a quality shower quite like a nice beer. And if you're lucky enough for it to be something delicious like a 471 IPA from Breckenridge Brewery then that's even better! 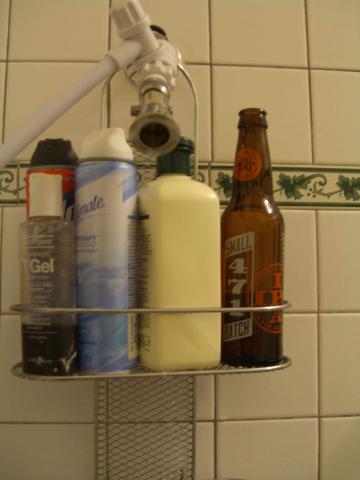